These are just a few of the power steering complaints that we’ve heard from customers and that we’ve seen floating around the Internet. What is going on?

A few years back BMW said: 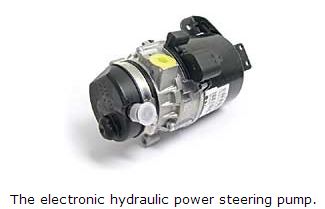 “We are aware of an electrical issue which has the potential to affect the Electro Hydraulic Power Assisted Steering system fitted to more than 223,000 petrol-powered Minis sold between 2001 and 2007. This includes 175,000 Mini one, Mini Cooper and Cooper S cars sold between 2001 and 2005, 9,000 convertibles and 32,000 Mini Hatch cars sold in 2006 and 7,800 Mini Convertibles sold in 2007. BMW says that in January 2005 a modification was made to the pump supplied with all new Minis which virtually eradicated the issue.”

Although BMW acknowledged the issue, they were slow to respond. Back in 2012, relief from the expense of replacing the pump was spotty at best, so in most cases customers were left to fend for themselves. However, to their credit, BMW has made the cost of the pump very reasonable.

The average price for the pump replacement is $800, but the prices can vary significantly depending on which services are or are not included (diagnoses, flushing, electrical system diagnosis, etc.).

A word of caution if you decide to do the repair yourself. The quality of pumps available varies a lot, so look for quality and buy from a company with good reviews (consider BMW first). Make sure to follow the instructions closely. Flushing and cleaning must be done with great care, and metal in the system will cause the unit to fail.

Finally, the most overlooked part of this repair is the process of determining why the pump failed. I saw one post by an individual who had installed three different pumps! It is very important that the technician ask the question “why did the pump fail?” The fact that this is a common failure is not a reason to just go ahead and install a new pump. Reasons for the pump’s failure might also be related to the auxiliary fan that keeps it cool. This fan and its associated wiring and control system are tucked away underneath the engine. Testing the entire system is critical, and it is worth paying for the diagnosis.

If you think you might be experiencing a power steering failure, be sure to have it checked out.  Difficulty steering can definitely be a safety issue.