We have experiences with customers all the time with car problems they try to fix themselves that go horribly wrong. Well that was the case with this Smart car, that had a ‘not-so-smart’ DIY repair. 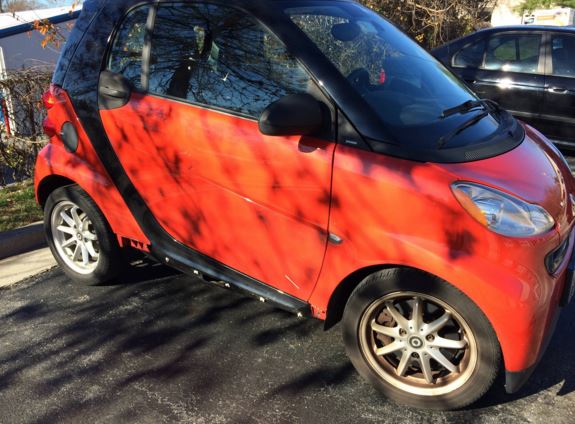 The Smart car’s owner was concerned that she had a head gasket leak. She she had been told by her boyfriend that there was engine oil seeping down into the spark plug tubes. Acting on her boyfriend’s recommendation, she added head gasket sealer to the cooling system, not realizing that it wouldn’t keep the oil from seeping into the spark plug tubes. 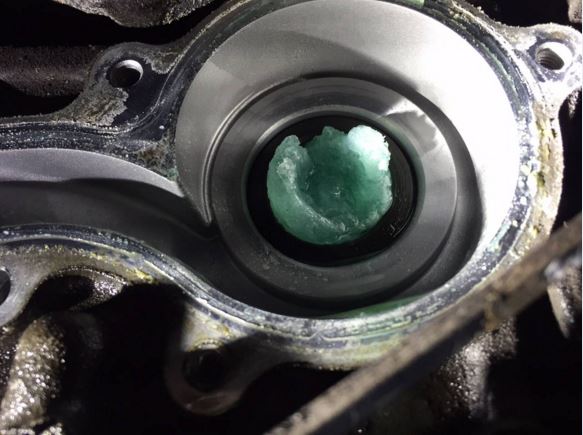 To get to this view of the housing, to see what was causing the problem, we had to remove the water pump (additional labor charge to remove the water pump). Notably, this blockage would not have happened if the instructions for applying the gasket sealant had been correctly followed, but more importantly, the applied fix, gasket sealant, wasn’t what the car needed (wasted money on gasket sealant).  Instead, if the problem had been properly diagnosed by a trained automotive technician, the recommended fix would have been a valve cover gasket.

This fix wouldn’t have required getting into the cooling system at all! The lesson here isn’t so much about using a product properly as it is about getting the diagnosis correct.  That’s most likely to happen if the automotive problem is diagnosed by a trained automotive professional.

It’s so frustrating from the technicians point of view that servicing, repairing and diagnosing a complex machine is considered by so many to be a simple thing.

To become a auto technician takes at least five to ten years….  Then you have to keep up to date with 30 to 40 hours of classroom training each year.

Taking advice from a boyfriend who took an automotive class in high school or helped his uncle out on weekends or even worst — doing a “Google search” is a sure road to disaster.   That certainly was the case here. Think about your job, your skill, your knowledge. The accumulation of knowledge and skills required for proper automotive service should not be dismissed or discounted. Ignoring that fact can be very costly. (Yes, I know I am on my soapbox.)

If someone offers you advice, vet them like you would an auto service center.  After all, you wouldn’t JUST take your car anywhere to get it fixed.  Why take advice from someone who’s not an expert or who has questionable credentials.

At our service and repair facility we have given away hours of free advice, road tests, computer scans and service and repair consultations. We want you to be informed and confident that when we recommend something it’s is based on the skills and knowledge of our team of professionals.

Thinking about doing something yourself.  Maybe you should make an appointment instead!