Over the past month or so we had two customers whose vehicle experienced an extreme clutch failure only months after having the clutch replaced. Clutches should last over 100,000 miles, and these two clutches failed in a very dramatic way! They had been entirely burnt out. All the frictional material had been torn away from the clutch disc. This is rather like someone driving with their foot on the brakes until all the brake frictional material burns away.

In the photo below, the image on the left shows clutch material ripped from the disc. The image on the right  is the pressure plate that has become extremely hot. 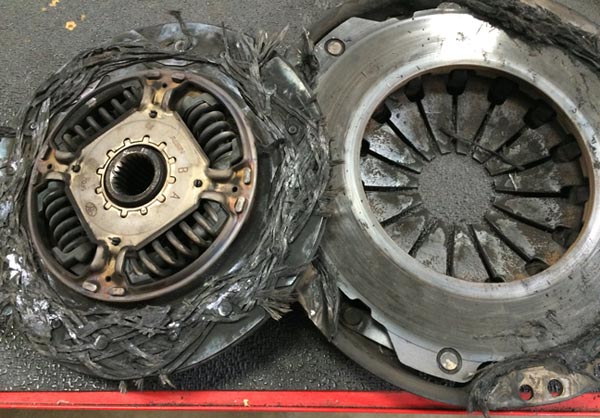 I was very shocked to see this happen. Both customers came to the conclusion that it must be a warranty issue. This finding is reasonable only if you don’t fully understand the workings of a clutch. In my 50 plus years of experience, I have never seen a single burnt out clutch that that was NOT the drivers fault.

When something like this happens, it puts us in a very sensitive position; no one wants to be told that a clutch failure is due to the way they drive.
The problem we ran into in both of these two cases is that there was nothing to suggest any warranty related failure or installation issue. In one of the cases, after digging a little deeper, we discovered that a young and inexperienced driver’s unauthorized use of the car was the cause of the clutch failure. The other case remains an absolute mystery. We agreed to repair the clutch under our “cherish the customer program,” but we were and remain concerned that we were unable to uncover the cause of the clutch failure.

So, what’s the lesson here? Use your clutch with care, don’t abuse it, protect it from inexperienced drivers, and you will be good to go!