My Battery Died Right After a Maryland State Inspection. What Caused This? 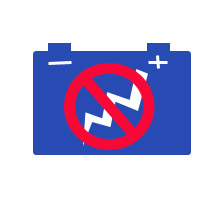 Recently a customer’s battery died the day after she picked up her car. She was convinced we had caused her battery to die. She told us her boyfriend knew about cars and told her,  “I suspect they cooked [overcharged] the battery.”

How can a battery suddenly fail?

In this case when the technician went to start performing the Maryland State Inspection he found the battery was low. He jump started the car, performed the inspection and then charged the battery as an added complimentary service.  The battery chargers we use charge very slowly and are computer controlled — it’s virtually impossible to overcharge a battery using these chargers.  Far from causing a problem, the car was returned in better condition because the car now started without a jump start.

In hindsight we should have recommended a battery charging system check or a least a battery check. Ironically we do perform a battery test on all our services so it would not have taken much effort to perform a test. Still this is hindsight.  What’s important is that we learned an important lesson from this incident, and next time we will perform a battery test.  That’s why your feedback is so important.  We are constantly learning, and our goal is to keep our customers happy and satisfied with their auto service.

So why does a battery suddenly die? Well in most cases it’s a shorted cell. One of the 6 cells in a 12 volt battery shorts, and instead of a fully charged battery reading 12.65 volts it reads 7.7 volts. For example, we recently serviced a car and checked the battery.  The reading indicated it was “good”.  Then, three days later, the reading said “replace”. So if you battery dies not long after being in a repair shop, and your shop is using updated, modern equipment, blame the battery not the repair shop.

Think you need a battery check?  Make an appointment; avoid a stall.