Car Won’t Shift into 1st Gear? You May Not Need a New Clutch.

Sometimes knowing a little can get you into big trouble. We have all done it. We start what seems like a small job, like plumbing, and have it turn out to be a major issue –the kind of problem that makes you wish you had called the plumber in the first place.

Not long ago, I received a plea for help from an owner of a Mini Cooper via a comment on the BA Auto Care blog. The Mini owner was having an issue with 1st gear. He would select 1st gear, release the clutch, and nothing would happen. He got advice from two friends who were mechanics, talked to a local dealership technician, and did some online research — lots of advice from lots of resources.

Based on his research, the first repair the Mini owner undertook was to replace the clutch.  Now this is a very expensive job, but unfortunately, it did not fix the problem.  This was when the Mini owner contacted BA Auto Care for advice.  I started to write up a response, but it seemed too complicated; I had lots of questions, so I decided to call him. I could not diagnose the problem over the phone, but I was able to guide him in the right direction. The problem seemed to be related to the torque of the engine as the clutch was let out. I suggested that he have someone operate the clutch while he observed what was going on. His wife agreed to help.  To ensure he had a good view of what was happening when his wife operated the clutch, he even removed the battery.  At that point, he had his wife select 1st gear while he watched.  Nothing happened.  He called out, “are you putting it in gear?” She was — but still nothing…  And then, he saw what was causing the problem; a linkage socket had worn out! ( see photos below). 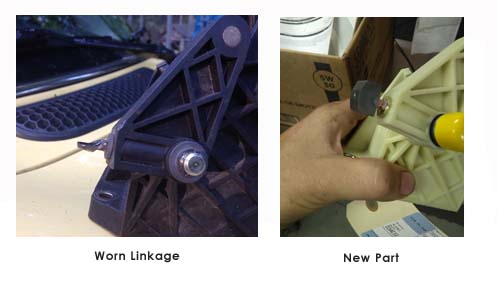 The Mini owner went to the dealer to buy the $80 part and found out it was in stock. The parts employee told him, “we sell a lot of these!”

In the end, it only took one hour to replace the part, and now the Mini is running perfectly! Unfortunately, it happened after the Mini owner spent hundreds of dollars replacing the clutch.

The moral of the story — well it’s three things.

If you don’t feel comfortable with this approach, then pay an experienced mechanic to take one to two hours to check it out for you.  You could end up saving a lot of money in the long run.

The sad thing is, every week I hear from people that ask a friend, go on-line, etc., — people that end up spending thousands of dollars on unnecessary repairs!

It seems that people who are naturally mechanically inclined, are the most vulnerable. When things do go wrong, their natural ability gives them the confidence they need to start the job. Often what they are lacking is the theory behind the system that’s being worked on. This is what I think happened to a Mini Cooper owner in the case I’ll describe below.